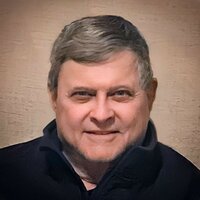 Daryl Wayne Mueller, 76, husband of Rebecca Lynn Gaylord Mueller, passed away Thursday, October 20, 2022, at Tidelands Georgetown Memorial Hospital. Born on August 28, 1946, in Affton, MO, he was a son of the late Arthur Henry Mueller and the late Janet Emily Mueller. Mr. Mueller was a US Army veteran and retired from ALCOA. He was a collector of antique cars and enjoyed traveling and fishing. Survivors include his wife of Pawleys Island; two children, Heather Kakert (Jason) of Pawleys Island and Ryan Mueller (Melodie) of Bettendorf, IA; and five grandchildren, Max Kakert, Rayna Kakert, Greta Mueller, Blythe Mueller and Rhett Mueller. He was preceded in death by a brother, Gordon Mueller. Services will be private. Memorials may be made to the University of Iowa Hospitals and Clinics, 200 Hawkins Dr. Iowa City, IA 52242. Online condolences may be left at www.ridgewayfh.com Ridgeway Funeral Home of Georgetown is in charge of the arrangements. (843) 485-4242