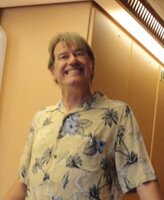 Waco Craten Smith, 66, passed away Saturday, October 1, 2022, at Tidelands Georgetown Memorial Hospital. Born on January 13, 1956, in Bennettsville, he was the son of the late Castle Grant Smith and the late Margaret Jessie Chavis Smith. Mr. Smith was a witty, fun-loving man, who had a lot of character. He enjoyed playing the drums, watching football and NASCAR racing. Survivors include one daughter, Jessica Lewis of Port Orange, FL; three grandchildren, Hailey Smith of Bennettsville, Stephen Myers of Rockingham, NC and Easton Houser of Port Orange, FL; and one sister, Darlene Dawson of Bennettsville. He was preceded in death by a sister, Brenda Chavis. Services will be private Online condolences may be left at www.ridgewayfh.com Ridgeway Funeral Home of Georgetown is in charge of the arrangements. (843) 485-4242