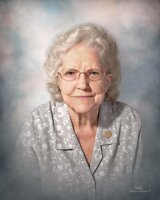 Doris Page Lacey, 91, passed away peacefully in her beloved home located in Georgetown, SC built by her late husband, Leland Lacey (1930 - 1981), in 1956 after four years of marriage. Born on March 18, 1931, in McClellanville, Doris was a daughter of the late Joseph Richard Page and the late Janie Idell Haselden. Being raised in McClellanville, Mrs. Lacey always held close to her heart her family that mostly still reside in her beloved “fishing village” and to her dying day, cherished the times she spent in the Village where she graduated high school and attended McClellanville Baptist Church. Doris is remembered by her family as the one who led the way to knowing Jesus Christ as our Lord and Savior. She cherished her many years of attending church services at Sauldam Baptist Church in Ravenel, Screven Baptist Church and Georgetown Baptist Church. Doris’ friends and family can tell an abundance of stories of her love for others be they strangers, distant family, close family and people of all walks of life - she was somewhat shy, but never met a stranger. All of these people can attest to the many meals Doris would cook for any and everyone that even may hint at stopping by her home, she would not let anyone go hungry, nor even eat just a little! She frequently said; “Are you ready for something to eat? I have plenty.” Doris, in addition to being a strong and faithful person, was also known for her abundantly caring heart. Along with her husband Leland, not only did they raise three boys, but at times they also took in other family members that found themselves in need. In her later years, she served as full time caregiver for her oldest son who preceded her in death, Leland "Lee" Legare Lacey who suffered a debilitating motorcycle accident only two years after her husband's passing. Survivors include two sons, Richard Dale Lacey of Murrells Inlet and Bruce Arnold Lacey of Orlando, FL; seven grandchildren; and two great grandchildren. The family will receive friends for a Celebration of Life from 10AM - 12PM Saturday, October 8, 2022, at Five Fathom Baptist Church 227 Scotia St McClellanville, SC 29458. Following the Celebration of Life a memorial service will be held at 4 PM Saturday, October 8, 2022 at Sauldam Baptist Church, 5945 County Line Road Ravenel, SC 29470. Inurnment will follow in the church cemetery. Online condolences may be left at www.ridgewayfh.com Ridgeway Funeral Home of Georgetown is in charge of the arrangements. (843) 485-4242