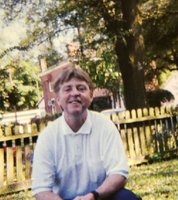 Sam O’Shea Prosser, Jr. 66, husband of Melissa Anne Burkette Prosser, passed away January 2, 2021. Born on February 22, 1954, in Georgetown, he was a son of the late Sam O’Shea Prosser, Sr. and the late Doris Prosser. Mr. Prosser was a member of Georgetown Pentecostal Holiness Church and was a US Navy veteran. He was the former owner of B&J Pest Control and enjoyed watching the Miami Dolphins and spending time with his daughter, Survivors include his wife of Pawleys Island; one daughter Brittany Jane Cooper (Nick) of Georgetown; two brothers, Robert Prosser (Tracy) and Jerry Prosser all of Georgetown. A memorial service will be held at a later date. Online condolences may be left at www.ridgewayfh.com Ridgeway Funeral Home of Georgetown is in charge of the arrangements. (843) 485-4242