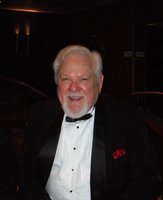 Joe William Harris, Jr., 86, husband of Denise Harris, passed away Thursday, December 31, 2020 at his home. Joe W. Harris was a true “builder”, having not one, but two distinguished careers within the oil & gas industry, spanning 1955 to the present, as a successful geologist and oilman responsible for several discoveries over the years, and as a true visionary who created tools that are used by a significant number of the upstream industry and regulators today. Born in Lubbock, Texas, in 1934, Joe was raised in Clovis, New Mexico, and attended high school in Lexington, Missouri. He graduated from Texas Technological College in Lubbock, Texas, in 1955 with a Bachelor of Science degree in Petroleum Geology with minors in Mathematics and Petroleum Engineering. After graduation, Joe worked as a geologist with Pure Oil in Midland, Texas; Asuncion, Paraguay; and Cochabamba, Bolivia, before being transferred to Calgary in 1959 performing subsurface prospect mapping. Oil and gas were found on his prospects in the Gliechen area of Southern Alberta. In 1963 Joe became Chief Geologist with Empire State Oil Company, during which the company developed the Bantry, Taber South, Taber Southeast, and Jenner fields in Southern Alberta. While with Empire State, the company drilled 168 wells in 18 months with a 67% success rate, many of which wells are still on production today. In 1965, Joe became self-employed as the president of Harris Exploration Ltd. Prospecting in Southern Alberta, he was involved in the successful drilling of over 30 prospects with discoveries leading to significant reserves in the area. In 1979, he sold Harris Exploration to Morrison Petroleums Ltd. Harris’ properties became the core of Morrison’s initial exploration and development. He was retained by Morrison as consulting geologist and he generated several successful prospects during the next ten years while working from his retirement home in Kihei, Hawaii. The move to Hawaii triggered an event that formed the basis for what may be his greatest contribution to the industry. In the process of moving, all his 20-years of accumulated hand-written tops and reservoir data, stored on 4” by 6” cards, were lost in shipment. While the records did finally turn up about a month later, the potential loss of all his data affected him profoundly. He realized that a loss like this could be catastrophic for any geologist or company and that a better way must exist to preserve and replicate these data. In 1981 he purchased a microcomputer and hired a programmer to create data-management software specifically for geologic data. In 1983 he formed geoLOGIC systems ltd. for development and sales of the software called geoMATE. Joe realized that more than just a database system was required as important information was missing from currently available scout records so geoLOGIC began gathering and high-grading data to be used within the geoMATE database system. In 1993, geoLOGIC released geoSCOUT— an integrated data and mapping graphic system running under Microsoft Windows as the replacement for geoMATE. geoSCOUT has since grown from a specialized data-management system designed for geologists to a complete decision support system in use in Canada, the United States, and Europe by all levels of the up-stream industry as well as being used by provincial and national regulators. Joe oversaw the company in its growth from a 2-man shop to become one employing over 150 people. The company is recognised as a leader in the provision of high-quality data and software solutions. Joe remained Chairman and CEO, and continued to be involved in the design and development of the products that geoLOGIC offered until 2015, when the company was sold. He continued to be involved in the design and development of the products that geoLOGIC offers. Since 2003, Joe and his wife, Denise, have been spending part of the year in Georgetown, where they have built a home. The balance of time was spent either in their other home in Bellingham, WA, or cruising, which had recently become a bit of a passion. Survivors include his wife, Denise Harris of Georgetown; two children, Joe Jarrell Harris (Jacki) of Alberta, Canada and Taran Leann Argiropoulos (Tom) of Arizona; three grandchildren, Cameron Proudfoot (Breanna) of British Columbia, Canada, Robbin Harris (Ilse) of Alberta, Canada and Brylee Horning (Colin) of Arizona; nine great grandchildren, Parker, Peighton, Piper, Cannon, Callan Proudfoot all of British Columbia, Canada and Ellie, Zoe and Fletcher Horning all of Arizona; two step sisters, Becky Schulz and Linda Harris (Dan) all of Florida; two step brothers, Michael Harris (Mary Ann) of Florida and Tom Harris (Angie) of Colorado; and six other special family members, Sean Udell (Kelly) of Alberta, Canada, Lisa Lake (Terry) of British Columbia, Canada, Kerry Udell (Jane) of California, Jodey Udell (Martine) of British Columbia, Canada, Galen Udell (Tracey) of Ontario, Canada and Erin Udell of Washington. He was preceded in death by a sister, Joyce Mathis. A funeral service will be held at 2 PM Sunday, January 3, 2021 in the Pennyroyal Memorial Gardens Mausoleum. Entombment will follow in the Pennyroyal Memorial Gardens Mausoleum. In lieu of flowers, memorials may be made to Tidelands Community Hospice, 2591 N. Fraser St. Georgetown, SC 29440. Online condolences may be left at www.ridgewayfh.com Ridgeway Funeral Home of Georgetown is in charge of the arrangements. (843) 485-4242