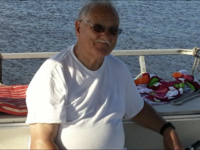 James Leon Mayfield, Jr. has gone traveling. After a wonderful life, and surrounded by his family, he departed his earthly home one last time. He leaves behind his mortal shell and is now in the Presence of The King. For a man who loved life so much, and who meant so much to so many, it is difficult to now summarize it all in a few paragraphs. Still, beyond the memories with which he has left us, we must put to paper a summary of the man. Born on January 29, 1936, in Camden, Arkansas, James Leon Mayfield, Jr. was the second child born to James Lewis Mayfield and Jessie Mae Jackson Mayfield. The family moved to Georgetown, South Carolina, where his father worked at the new International Paper Mill. While in high school, James sacrificed playing football, which he loved, to work and contribute financially to help his parents and siblings. After graduating from Winyah High School, he went to work at International Paper, in Georgetown, where he worked for over 50 years. Whether at work or home, there were few things that James could not repair or even make, with a few tools and some basic materials. He had a fantastic mind for how things worked and how to create and mend. He had been a member of the Winyah Masonic Lodge for many years. He had been a member of Screven Baptist, Georgetown Baptist, and Cornerstone Baptist. In recent years, he enjoyed watching the broadcast services of First Baptist Church of Columbia. Although he enjoyed eating seafood, hunting and fishing, and old cars, James was happiest when surrounded by his children and grandchildren. He was the proud father of ten children, all of whom survive him: Martha Mayfield-Hoyns, of Andrews; James Mayfield, III (Susanne), of Hemingway; Debra Reed, of Georgetown; Gordon Anthony Mayfield (Julie), of West Columbia; Joan Damon (Paul), of Lexington; Regina Todd (Gary), of Hemingway; Saralynn Smith (Jason), of Lexington; Jessie Earnest, of Aynor; Wesley Mayfield (Dena), of Florence; and Barbara Brewer (Gene), of Myrtle Beach. He was also the proud Grandfather of many wonderful grandchildren: Joel Glass; Erika Davis; Faye Michau; James Glass; Charlotte Reed; Lauren McCants; James Stanmore Reed Mayfield; Monica Damon; Gary Todd, III; Cole Todd; Bradley Smith; Jessica Earnest; Noah Earnest; Jenna Mayfield; Kelsey Mayfield; Carmen Mayfield; Chesley Brewer; Ben Brewer; and Brett Brewer, all of whom survive him. He also loved the grandchildren who predeceased him: Evelyn Reed and Andrew Mayfield. He was also Blessed with several Great-Grand Children and 3 great-great grands. James particularly enjoyed making Christmas special for all and delighted in seeing the children play with their Christmas toys. He also loved providing a wonderful beach retreat for his family in the summer, where he would oversee games of volleyball, water balloon fights, and tubing in the waves. Of all the places on earth that he found joy, few could contend with a park bench in the Pavilion Amusement Park at Myrtle Beach, where he was always happy to introduce the newest Mayfield member to snow cones or cotton candy. He was probably happiest when he saw the smiles upon the faces of his children and grandchildren. As much as he loved his children and grandchildren, he also loved his wife of 48 years, Joan Mayfield, who survives him. Together they worked and raised their children as one family. They gave them the best that they could, from honest, hard-working people. James and Joan provided a home filled with a lot of things, but most importantly filled with love and an example of love. They would give their last anything to anyone, and especially their children and grandchildren. James was predeceased by, and will be reunited with, his Parents; a Sister (Edith Lambert); and a Brother (Charles Mayfield). Besides his Wife, Children and Grandchildren, James is survived by a Sister, Veiva Smoak and a brother, Tommy Mayfield. He will be missed by many. Funeral services will be private. We would like to thank Tidelands Hospice for the exceptional care they gave our father, and comfort to the family. In lieu of flowers, memorials may be made to Tidelands Community Hospice, 2591 N. Fraser St. Georgetown, SC 29440, Martha’s House, PO Box 434 Georgetown, SC 29440 or to Teen Challenge, PO Box 249, Ozark, MO 65721 Online condolences may be left at www.ridgewayfh.com Ridgeway Funeral Home of Georgetown is in charge of the arrangements. (843) 485-4242