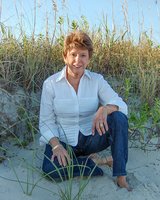 Peggy Wheeler-Cribb, 80, died December 9, 2020, with her family by her side, in Georgetown, SC. A memorial service will be held at 2 p.m. Friday, December 11th, at First Baptist Church of Georgetown. The family will receive friends one hour prior to the service in the church parlor. A burial will directly follow at Pennyroyal Memorial Gardens. Peggy was born on October 10, 1940, in Andrews, SC, to the late Willie Alexander Powell and the late Myrle Thomas Powell. Peggy was the epitome of a southern woman. She loved Jesus, family, friends, and entertaining her loved ones. Peggy enjoyed hosting tea time, showers, and pool parties. Her home was always filled with beautiful decorations and the laughter of children. While Peggy was always willing to open her doors to anyone, her greatest joy in life was spending time with her grandchildren. Peggy created and ran Happy Times Preschool School, in Georgetown, for 30 years. Peggy's passion for helping children learn and grow did not go unnoticed. In addition to being loved and appreciated by families, she was presented the "Woman of the Year" award by the Georgetown County Business and Professional Women's Club. Peggy was a woman of faith who felt called to spread the word of God to all his children. After retiring as pre-school director, Peggy founded and ran Grace Church, a ministry for children with special needs, for almost 10 years, through First Baptist Church. Peggy was as creative as she was caring, she authored several children's books. Peggy is survived by her daughter, Diane Rodgers (Johnnie); son, Darwin Wheeler; grandsons Jason Wheeler (Emma) and Nathan Wheeler, step-grandchildren John Rodgers (Kristen), Jason Rodgers (Angie), and Jeanna Rodgers, and great-granddaughter, Elsie Grace Wheeler. Step children Valerie Cribb Sullivan, Brian Cribb (Kylie) Katlyn Cribb, Presley Cribb, Chance Sullivan, Peyton Sullivan, as well as her brothers Thomas Powell and half siblings, Sally Knight and Freddie Powell. Peggy was preceded in death by her husband C.L. Cribb, as well as her first husband, Will Wheeler, and her sister, Lucy Herring and brother W.A. Powell. In lieu of flowers, please make memorials to First Baptist Church or Amedisys Hospice (391 Seaboard Street Unit 6 Myrtle Beach, SC 29577). Online condolences may be left at www.ridgewayfh.com Ridgeway Funeral Home of Georgetown is in charge of the arrangements. (843) 485-4242